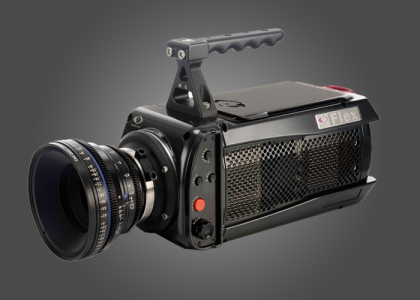 The Phantom Flex offers an unprecedented degree of flexibility in all areas of high-speed image capture, and goes beyond HD to support 4-megapixel imaging, when the highest resolution is required. Depending on the shooting mode and resolution, the Flex is capable of shooting from 5 fps to over 10,750 fps.

In Phantom HQ Mode, Vision Research’s proprietary image enhancement technology results in electronic image stability unprecedented in digital high-speed cameras: stable blacks, low noise, higher dynamic range, and repeatable shots over the full range of supported resolutions, frame rates and temperatures without the need for pre-shot black references. Maximum frame rates in HQ mode are about half those in Standard mode, which means that in HQ Mode Flex captures images at speeds up to 1,275 fps at 1920×1080 or 2,640 fps at 1280×720.